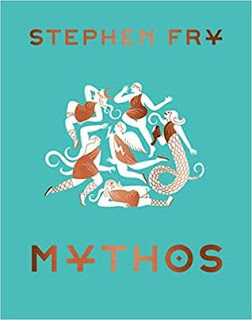 Mythos is a retelling with etymological asides and historical nuggets told by the inimitable Stephen Fry. Originally published in 2017, this reformatting and re-release for American readers, out 27th Aug from Chronicle Books, is 352 pages and will be available in hardcover, audio, and ebook formats.

Stephen Fry is simply a treasure. He's erudite and genuinely funny, urbane but not stuffy. He's self deprecating and frighteningly intelligent but not above being naughtily delighted over a raunchy pun. No surprise, then, that he turned his prodigious writing talent to Greek mythology. Most readers will be familiar with the basic stories; what's new are the asides and footnotes. There are comments on etymology and how the genesis of these stories disappears into our human prehistory. There are also plenty of linguistic asides, showing the threads between the origins of words which are used down through history to today.

There is plenty of truly bloody horrifically violent material in the Greek mythos, but Mr. Fry finds the absurd, the comedic and gives it his own twist, and in a few cases left me gasping with laughter. There was a lot of obscure information with which I was unfamiliar, despite my unhealthy obsession with Bullfinch and Graves. Case in point, the not-terribly-well-known sea goddess Doris (seriously. Doris).  Even better, this volume is the first in a series.

Loved this. Laughed so much. This would make a superlative classroom support book or recommended text for history, classics, group read, home library, etc.

Five stars. I'll be revisiting this one again and again.