Meet Me in the Future: Stories 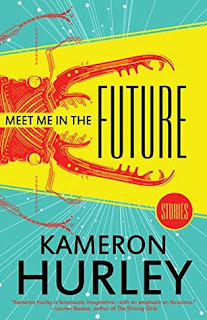 Meet Me in the Future is a collection of 16 works of short fiction by Kameron Hurley. Released 20th Aug 2019 by Tachyon, it's 288 pages and available in paperback, audio, and ebook formats. All of the stories are previously published between 2006 and 2018, but collected here for the first time. The author has also written an erudite and thought provoking introduction (not previously published elsewhere) in which she discusses the writing process, some history, what things really mean (hint: don't be lazy, we should figure it out ourselves), and shares other thoughts about creativity, the writer's life, and the world in a really personal conversational style. I felt as though we were talking about deep stuff over the last half bottle of wine at 3 in the morning.

These stories are top shelf fiction. Every story I read was the best one yet. I had planned to read them slowly and savor them. That certainly didn't happen. I wound up reading late into the night and almost missed my work bus stop the next morning. It's difficult to pick out a standout story from the collection, but if forced, When We Fall was amazing and made me sniffle (in a good way).