Whiskers in the Dark 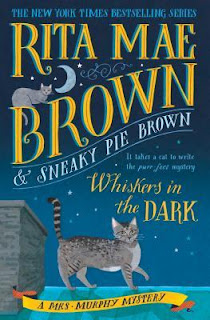 Whiskers in the Dark is the 28th (!!!) book in the Mrs. Murphy mystery series by Rita Mae Brown (& Sneaky Pie). Released 4th June 2019 by Random House on the Bantam imprint, it's 288 pages and available in hardcover, ebook, and audio formats.

This is another one of those anthropomorphic animal cozy mystery series which is like a visit with an old friend for me. I'm always glad to see a new installment being released and happily the series quality has always been good in my opinion. This one sees the animal and human crew preparing for a hounds competition at a historical hunting lodge.

The narrative story arc is broken into two parallel timelines in the same location, one in 1787, one in present day Virginia. The bridge that ties the two together is the discovery of an unrecorded death (a murdered woman) from 1787 discovered in the churchyard wearing a fortune in jewels. The chapter timeline jumps are well demarcated with timestamps on the chapter headings, so they're not confusing. The plotting is variable. For me it moved along at a good clip and then got somewhat bogged down in relating a lot of historical information. I found the historical minutiae interesting, it might be less so for other readers.

The language is clean, the murders are (relatively) bloodless. There is a plot element and description of sexual assault in the 1787 plotline which might bother some readers, but there's nothing extremely graphic. There's a lot of social commentary, including views on gender roles in early American history along with slavery. The modern day plot denouement was a surprise for me, even though I had guessed 'whodunit'.  There's also a paranormal (ghost) subplot which was quite melancholy to me.

The monochrome illustrations by Michael Gellatly give a sweetly nostalgic feel to the book. This is the same artist who illustrated earlier books in the series.

Four stars, I love Ms. Brown's work, and I am always in awe of her ability to combine deep social commentary with humor and wit.