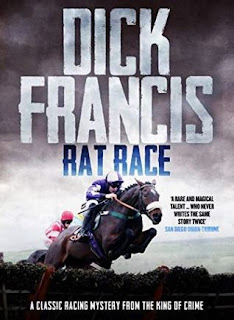 Rat Race is a mystery/thriller written around the horse racing community in Britain. Originally published in 1970, this reformat and re-release out 2nd May 2019 from Canelo is 170 pages and  available in ebook format (earlier editions available in other formats).

This is an enjoyable and fairly typical Dick Francis thriller. Former commercial pilot Matt Shore has been demoted to flying 'puddle jumper' commuter flights for racing personnel to the race days. On the return flight from the trip up, he makes an emergency landing just minutes before the plane explodes. The protagonist is a flawed good guy dealing with some tough breaks in his life (through no fault of his own). There's a light potential romantic subplot and the bad guys get their comeuppance in the end. Pure Francis. Still enjoyable for all that.

I love the author's oeuvre (even the ones supposedly ghost written by his wife and the ones his son helped finish). This was a very enjoyable short read for me. For non-fans or new fans, this is a standalone and if it's maybe not at the apex of his large body of work, it's certainly not near the nadir.

Four stars. It's really nice to see classic works by popular authors being released in ebook format for new generations of readers.

Disclosure: I received an ARC at no cost from the author/publisher for review purposes.
at June 16, 2019