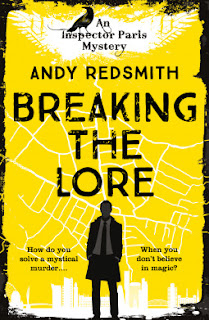 Breaking the Lore is the first book in a new urban fantasy cozy mystery series by Andy Redsmith. Released 15th April 2019 from Canelo, it's 321 pages and available in ebook format.

This is an urban fantasy police procedural by a new-to-me author and it's a good one. The book literally grabbed me by the hair from the first line and didn't let go. Check out the first two lines:


Discovering fairies at the bottom of the garden is supposed to be good luck. Except when the fairy has been crucified.

The book opens with Paris standing over the corpse of the aforementioned fairy. He's surprised as anyone to find out that fairies and other supernatural beings (dwarves, trolls, demons, etc) are real, and potentially much more genetically similar to humans than anyone thought.

The plotting is taut but not too fast and the dramatic tension is perfectly tuned throughout. There is little actual gore and the language is mild (a few bloody hells, and that's about it). I have to say a bit about the author's command of dialogue driven plot. The dialogue is bloody brilliant. The characters live and breathe and I was not yanked out of the story one single time by any of the characters delivering a clunky bit of dialogue.  There were several encounters which actually really made me laugh.

I can certainly understand the comparisons to Aaronovitch's Rivers of London though to me they're very different books. I would say Kadrey's Sandman Slim series would be a nearer comparison, though I think if this series lives up to its potential, it'll edge Sandman Slim out of my top 5 urban fantasy favourite series. (and Kadrey's books have a lot more gore). It's probably worth noting for readers from North America, the slang and spelling and idiom are British English. It shouldn't be a problem, just remember fag = cigarette, torch = flashlight and you're good to go.

I am ashamed to admit that I missed the publication date on this book (I try very very hard not to do that) and it languished in my TBR/review pile for a lot longer than it should have. The only upside is that now I hopefully have a shorter wait to queue up for the next books in the series.