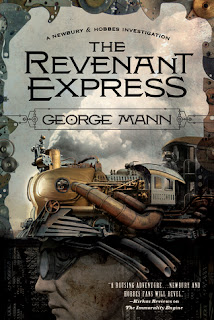 The Revenant Express is the 5th book in the Newbury and Hobbes mystery series by George Mann. This series reminds me a lot of The Avengers (the Steed & Peel Avengers, that is), set in an alternate Victorian steampunk world. There are steam trains (with a central train subplot set on an intercontinental steam train reminiscent of the Orient express), magic, secret societies, a clockwork heart (<3 the author's nod to Fabergè), spies, counterintelligence, skullduggery, creepy science, zombies (zombies!), trains, and more.

This is a surprisingly intricate book with multiple intertwining subplots and a large number of returning characters; as such, it doesn't work well at all as a standalone. I was unfamiliar with the series before I started reading, and I was forced to go back to read the first book to have a clue what was going on.

Whilst I am a fan of steampunk fantasy, I'm not much of a horror fan, and this series is a lot more in the horror vein than I prefer, honestly.  That being said, however, this is a well crafted book with taut plotting and pacing, good and believable dialogue, and well written characters who follow internal motivations. I enjoyed it enough that I believe I will pick up the next book in the series at least.