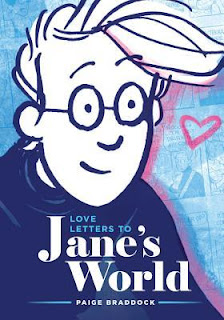 Love Letters to Jane's World is an anthology collection by Paige Braddock with an anticipated release date 21st August, 2018.  Published by Lion Forge, it's 304 pages of previously released material with new background info and commentary.  It's available in paperback and ebook formats.

I love the ensemble cast in Jane's World because they highlight the innate random absurdity of the universe (talking dogs, aliens, bigfoot (bigfeet?) glasses wearing crabs), whilst still remaining firmly human in their day-to-day travails (crap job, relationship problems, money issues).  I love the escapism and humor (and there's lots of both to be found here).  The book doesn't spend any page content getting new readers up to speed, so it's good to have a little background familiarity going in.

Underneath the random weird stuff, the cast seem to be (mostly) decent and kind.  There's no hidden agenda, they're just folks living their (slightly weird) lives.  Jane's something of an everyperson dork and she's really easy to like, even when she's being clueless and annoying.

I would strongly recommend not trying to compare this series to anything else.  I think a lot of reviewers have such strong preconceived ideas of What It Means To Be A Gay Comic that they sort of miss the point.  Jane & co. are people going about their lives, buying wine and groceries and going to work and don't HAVE (and shouldn't need to have) an agenda.  It's a mostly humorous comic book about life whose titular character happens to be gay.  Don't read it just for the gay.

I really enjoyed the book a lot.