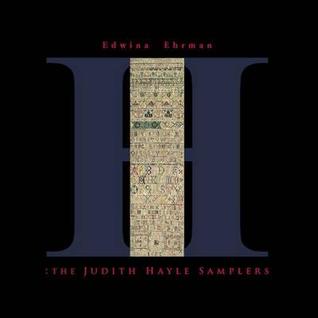 The Judith Hayle Samplers is an exhaustively researched but eminently readable treatise on the needlework school run by Judith Hayle in Ipswich in the late 17th century. There are 11 extant samplers from Judith Hayle's school.  7 which were made directly under Judith's tutelage and 4 more directed by her daughter, Rebecca Thomson. This book describes and illustrates each of them along with as much historical info about the makers as is possible along with a wonderful provenance for each of them.   I found the biographical background info almost as fascinating as the illustrations themselves.

I'm a huge needlework/embroidery nerd and spend a lot of my time recreating samplers from the past with materials as close to the original period ones as possible. I enjoy samplers especially since they played a vital central role to the education and position of young women in times past.

Edwina Ehrman is a textile historian and curator at the London Museum and was previously associated with the Victoria and Albert museum.  This makes her pretty much a rock star in the historical embroidery nerd universe.

The book itself, published by Needleprint (now sadly out of business), is 108 pages, high quality softbound with color photos.  It was published in 2007 and can still be found occasionally on ebay, betterworldbooks, or the amazon secondary market.  The price can vary hugely, but bargains can still occasionally be found.

It's worth noting that this book does NOT include the patterns for the samplers, they're available elsewhere.

Definitely an important book for an admittedly niche audience.  It's worth tracking down a copy.
Five stars.
at May 05, 2018