The Flaw in the Stone 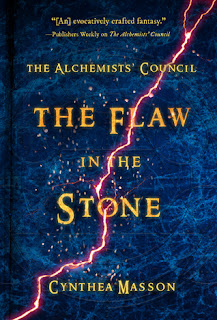 The Flaw in the Stone is the second book in the Alchemists' Council series by Cynthea Masson. It had been over a year since I read the first book in the series, but I decided to go ahead and read the second one and go back and refresh if I got lost and couldn't follow along.  There was enough backstory in this installment that I never felt the lack of background info, especially since several centuries separate the two narratives.

The thing that drew me to this book and kept me reading was the careful and lush language.  It's a really enjoyable read.  For me the prose was more engaging than the world building or characterizations, though the magical system and explanations were well done.

I would have originally categorized this as a new adult novel, and it really is, but there is a fair amount of sex (not at all gratuitous; it's intrinsic to the plot).  If that's a problem for the reader, it might be best to be forewarned.

I think the book would be somewhat confusing and/or frustrating without having some familiarity to book one (The Alchemists' Council).

All in all, a somewhat complex read, occasionally confusing for me but beautifully written.  The prose is the standout star of this novel.