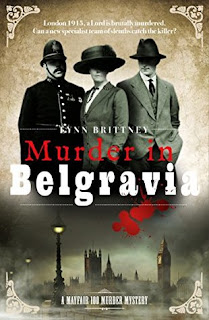 Murder in Belgravia is the first book in what promises to be a continuing series.  Set in WWI London, this is a semi-cozy with an ensemble cast.  Despite having a relatively large cast of characters, the author does a good job of writing clearly and concisely and there isn't any confusion about what is happening to whom.What begins as a seemingly straightforward case of murder by self defense turns out to be anything but.  I would normally call this a cozy, however the fairly graphic descriptions of injuries, sexual abuse, pedophilia, homophobia and sexism, while softened from the brutal reality, were more than most people expect for a cozy mystery.  I didn't find the realism detracted from the novel, but I can see that for many readers it might.

The plotting and characterizations are well done and the dialogue is good, if somewhat breezily anachronistic (almost sarcastic in the modern usage of the word).  The women in the book are given a very free rein to investigate and interview people; it's sometimes a trifle jarring in context.

The denouement was very abrupt and somewhat unexpected for me.  I admit that it was pushing the boundaries for my suspension of disbelief that all the subplots were tied up so neatly and happily-ever-after-ly.  I can understand the desire for the author to give the poor tortured and downtrodden secondary characters a chance at a better life; I just wasn't entirely sold on the deux ex machina methods of delivery.

That being said, this is an enjoyable 211 page cozy, well written and entirely readable from a new voice in historical crime.  The author has written in other genres and for other audiences before.  Due to be published  6th Dec, 2017 from Mirror Books, available in ebook and paperback formats.

Three and a half stars, I will be following this series further