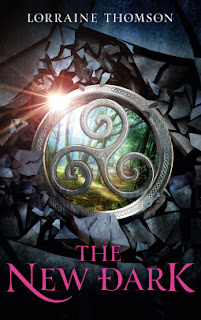 Yet another YA dystopian quest fantasy with a young female heroine destined (special triskelion birthmark!) to save everyone and lead to a more enlightened future whilst finding herself. Set in the second generation after some unspecified apocalyptic event that broke down society and left most technology nonfunctional and all but forgotten (despite being roughly 15 years ago), Sorrel goes on a disconnected quest to reunite with her brother and love interest.

There are glimmers of real potential for something out of the ordinary in this first book. I hope the author develops the world further and shares more backstory for the events leading up to the present and the reasons for them.  I had a lot of problems with the motivations for many of the characters, and the dialogue was very uneven and awkward in places.  The love interest subplot felt tacked on, honestly.  It's a YA dystopian novel with a female protagonist, ergo there must be a love interest.  He's unappealing and not very compassion inducing.  Sorrel herself is prickly and immature and I spent most of the book really wishing someone would shake her.  Nearly ALL of the characters wind up making uninformed naive choices that nearly get them killed (taking free drinks from someone you have just said that you don't trust in a dangerous strange place? Not the best judgement on display).

There are a lot of uncomfortable themes including sexual abuse, slavery, racism, violence, torture, etc.

The biggest problem with this book for me was that whatever cataclysmic event(s) which changed the world happened, they happened roughly 15-20 years previous to the narrative.  That is not nearly enough time for societies to form and splinter, developing independent culture and language, and despite the story arc happening in cities that are walking distance from one another, none of them were really aware of one another.  There was so much emphasis on really creepy passages (they're basically the only ones which are well written and fleshed out).  The almost-sexual-abuse was creepy in a sustained manner.  It just went on and on. The roving mutants who attack the peaceful settlement and triggered the whole story are not explained at all.  They just come out of nowhere and maim and murder and rampage.

It was also difficult for me to form any sort of bond with Sorrel. She murders, tortures, poisons and whines her way through the book.  She's not likable in the slightest.

This was a very difficult book to enjoy.  I am, admittedly, not the target audience, perhaps people who really enjoy YA dystopian novels will like this one.

Two and a half stars

Email ThisBlogThis!Share to TwitterShare to FacebookShare to Pinterest
Labels: dystopian, fantasy, YA