The Big Book of Rogues and Villains 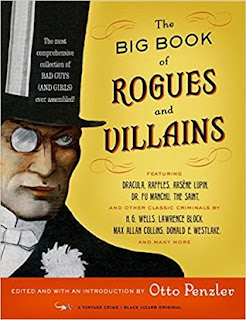 This is a BIG book, 944 pages, including 73 stories from both famous authors (O. Henry, Erle Stanley Gardner, Lawrence Block, Max Allan Collins and many others) as well as authors who are less well known today than they were in their contemporary periods, but may be familiar to fans of the old pulp magazines such as Phantom Detective (C. S. Montanye, Paul Ernst, Donald Keyhoe, etc).

The collection is broken down and arranged chronologically: The Victorians, Nineteenth-Century Americans, The Edwardians, Early Twentieth-Century Americans, Between The World Wars, The Pulp Era, Post-World War II, and The Moderns.  Each of the stories has a short introduction including publication notes and author bios.  The intros were a real treat to read and even though I love detective fiction trivia, there was quite a lot that was new to me.

I love anthologies and collections, and this one is no exception.  The hook for the anthology is that the stories feature one or more rogues/villains.  Sometimes they're portrayed in a more favorable light, like the stories featuring Lupin and Raffles and some are just dastardly, Dracula and Horace Dorrington, for example.

Since the book covers such a broad span of time, some of the stories reflect the language and dialogue of their period, but for anyone comfortable reading a Holmes story, these stories won't present any problems at all.

I enjoyed quite a lot of these and even enjoyed reading a few of them aloud together (fun road trip activity, passenger reads, driver drives :).

Heartily recommend this collection.  I found a number of authors who were not previously familiar to me for further reading.