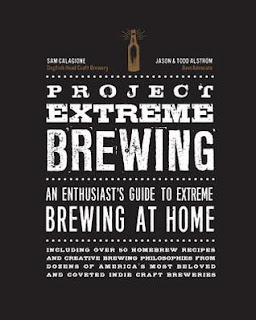 Project Extreme Brewing, due out 21st Nov, 2017 from Quarto Publishing and the very well known artisinal brewers and beer advocates, Sam Calagione and Todd & Jason Alstrom, is a useful tome of beer advice, instruction and recipes covering 'extreme brewing', which they define as:


Extreme beers are beers made with extreme amounts of traditional ingredients or beers made extremely well with non-traditional ingredients. The people who make these kinds of beers, both professionally and at home, share a curiosity for how things work, and a passion for breaking free from the crowd (in this case boring, watery beer), a desire to put their own thumbprint on the world, and a propensity for risk. (1)

The book starts with a pretty good introduction to methods, necessary kit and sterilization.  The authors do presuppose that the reader isn't a total neophyte brewer and is more or less familiar with the basics.  There are also some interesting introductory picture and question sidebars with some neat trivia and info about the artisinal brewing culture in the USA and short history of same. The intro and tutorial parts of the book fill about 40% of the total content.

The lion's share of the content is given over to very specific recipes in both extract and all-grain formats.  These recipes are for specific beers from specific breweries including Sam Calagione's own Dogfish Head Brewery. There are a couple recipes for saison in the book which I fully intend to make this winter.  (Fruited beers and spiced meads (aka metheglin) are my faves, and I don't care who calls me a philistine!!).

The last 10% of the book has a nice Q&A and afterword, along with a handy index.

All in all, a worthwhile addition to the zymurgist's library and guaranteed to keep the keen homebrewer busy for a long long while.

Five stars
Disclosure: I received an ARC at no cost from the author/publisher.
at November 12, 2017