I Was Picked: The John Challis Story 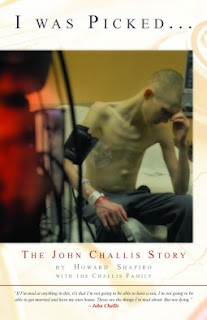 Some background.  I work as a bio-engineer in a histopathology laboratory in a teaching hospital.  It's a large hospital, with many thousands of biopsies and tests going through our department every year.  I'm a very small cog in a big productive machine, but every single day I'm at work, my colleagues and I see biopsies and every one of them has a story.  We don't have direct patient contact, of course, but we understand and never forget that there's a patient (and family) behind every test we run and everything we analyze.

The book begins with an introduction and short early biography of John and his family.  From a tough early infancy (they thought he had cystic fibrosis) and surgery, John turned into a normal and active kid.  He participated in sports, he went to school, he lived his life up until age 16.  Nobody expected his cancer diagnosis, terminal liver cancer with lung metastasis.

Most of the book is written about the time after his diagnosis.  It's about how he and his family reacted, how his teammates and people in the community reacted and the people he touched in his 2 year cancer battle.   The picture album in the middle of the book is especially poignant.

This story puts a very human face on cancer.  It's honestly and powerfully written and the author never lets his words steal the emphasis from John and his family's story.  None of us know how long we have or what's going to happen. The only thing we have control over is how we interact with our situation and the people around us.  Even though he died at 18, John had dignity and humor and grace which belied his age.

John Challis was very real to me.  I could feel his personality and sadness and compassion and humor and anger.  It's an emotional and raw book, especially for me personally because I grew up in the area and know so many of the places written about in the book.

The author, Howard Shapiro, worked closely with John's family and friends to research and write this book.  It's a book that will stay with me for a very long time.