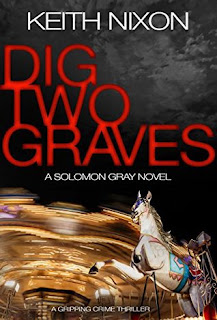 Dig Two Graves is the debut in a new series from author Keith Nixon and publisher be-ebooks. Less of a police procedural than a psychological thriller, it's nevertheless a taut, well plotted ride.  Soloman Gray is a disillusioned, depressed, alcoholic and completely dysfunctional man.  His young son went missing 10 years ago, his wife has died and his career as an inspector is hanging by a thread.

When he's called to the scene of an apparent suicide, the coincidence of the victim's age matching his missing son's leaves him even more shaken and disoriented.  Things go from bad to worse when Solomon's own contact info is found on the victim's mobile.

Every step forward shoves Sol deeper into his self destructive cycle and implicates him more closely with the ongoing investigation as the bodies pile up.

I personally found Sol's unrelenting depression and self destruction wearing.  He wasn't a particularly likable or sympathetic character. The writing and plotting were, however, masterful and I felt genuinely interested to see the characters' development.

The denouement was well done (and somewhat surprising) and sets up the next book(s) in the series.  I'll look forward to seeing how Mr. Nixon carries on, and hope the future is somewhat brighter for poor Sol.