When the Lonesome Dog Barks 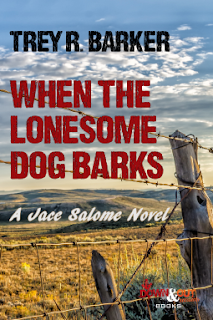 A new police procedural and western mystery novel from Trey R. Barker and Down and Out Books due to be released 20th November. This is the third novel featuring Deputy Sheriff Jace Salome but my first introduction into the series and it works well as a standalone book.

The book is set in rural Texas. Jace, who is assigned to security at the local prison is imperfectly dealing with psychological fallout from traumatic events and violence in her past, and trying to figure out if her job is right for her and whether she can move forward to doing detective work.

The secondary cast of characters is large, but well developed and contribute to the story.  The banter and occasional rawness and sarcasm of people who are forced to work closely together in a stressful situation that could erupt violently at any moment is masterfully written and it's no surprise to find the author has a history in law enforcement.

The writing style itself is often jarring and difficult to follow.  There are places where the dialogue isn't clearly marked between characters, so it's not easy to see who said what. I received an early ARC, so the wrinkles will almost certainly be ironed out with final editing, but there were also several typos and misspellings; 'then' instead of 'than' for example. They didn't prevent enjoying the narrative, so it's probably a non-issue for most readers.

The plotting is well paced and taut.  I enjoyed the story and especially enjoyed the dichotomy of her stress and tightly wound work persona contrasted with her unusual but loving mismatched family.

Definitely worth a look, especially for fans of gritty western mysteries.