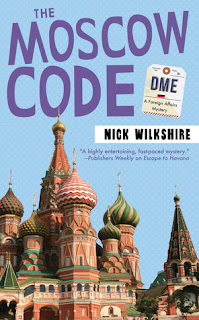 Due to be released 5th Dec, 2017, The Moscow Code is the second installment in the Foreign Affairs Mysteries by Nick Wilkshire from Dundurn Press.

The tag line from the back cover reads, "In Moscow, the truth can be a dangerous commodity".

When Charlie Hillier is seconded to Moscow as a consul for the Canadian embassy, he's happy to have escaped his adventures in Havana and not have to go back to Ottawa, where his ex-wife is involved with another higher ranking government official.

A dinner and after dinner drinks with an old school friend he hasn't seen for over 20 years lands them in the local drunk tank where he meets a fellow Canadian who's being held on vague drug related charges.  Charlie promises to look into the case and charges pending against the Canadian man in his role as a consul for the embassy.  When the Canadian man dies in custody under mysterious circumstances, Charlie's search for justice and answers leads to a very tangled web of lies, deceit, drugs and corruption.

This book was a lot of fun to read.  Charlie's a great character, well developed and charmingly rumpled.  He's almost a Canadian James Bond, but more polite and less suave! The supporting characters are well thought out and further the action and plot very well.  The dialogue is well written and believable.  Even though it's set in the current time period, it reminded me quite a lot of the Travis McGee novels, though McGee is a lot grittier and macho, they both have the same fixation with the truth at all costs, and hang the consequences.

I was engaged with the book from the beginning and the denouement was satisfying.  I'm very interested to read about Charlie's further adventures and look forward to his next posting in (I think) Japan.

Four stars, a very light, enjoyable read.
Disclosure: I received an ARC at no cost from the author/publisher.
at October 17, 2017