The Mansions of Murder 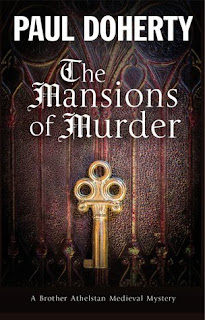 This is the 18th entry in the Brother Athelstan series by Paul Doherty from Severn House.  Due out on 1st December, 2017, it's a very well researched historical mystery set in the late autumn of 1381 in London.  After the great revolt was put down earlier the same year, the uneasy peace was held by private armies, gangs of ruffians called 'rifflers', and the standing army.  A functional civil government had more or less been re-established and the parliament had been recalled to London.

Brother Althelstan is called in to investigate the perplexing 'locked room' mystery of a priest and a visiting retainer who are found dead in a church.  Not only are both men found murdered inside the locked church, but a woman's corpse is missing and a treasure chest is opened and emptied.  The missing dead woman is the recently deceased mother of the most notorious of the rifflers, Simon Makepeace, a.k.a. the Flesher.

Having read many of Mr. Doherty's other books, I was expecting a well crafted mystery.  Although it is the 18th book in the series, it had been some years since I had read any of the other books in this series and it works perfectly well as a standalone mystery.  The background for the characters is presented in a way that manages to convey all the necessary backstory without spoon-feeding readers already familiar with the setting and characters.

The plotting and dialogue are very well crafted and the entire book is beautifully researched and historically correct.  I felt that the dialogue succeeded quite well in walking the fine line between being comprehensible to a modern audience and still maintaining a period flavor.

There are many subplots and subtly interwoven stories here and I wondered how Doherty would manage to tie them together in a lean 240 pages, but he does manage it (and satisfyingly).  I also really enjoyed the development of Athelstan's friend, Sir John Cranston, the Lord High Coroner of London.  He's by far one of my favorite characters (and I wish he would get his own series).

All in all, a really nicely written and satisfying period mystery; can we ever really have enough of those?

Four stars
Disclosure: I received an ARC at no cost from the author/publisher.
at October 27, 2017