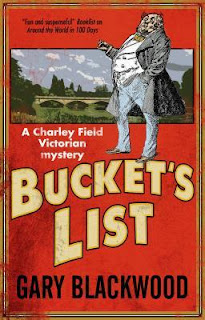 Bucket's List is the first of a new series by Gary Blackwood, due out 1st December, 2017 from Severn House publishing. It's set in 1853 in London and environs.  The main character, Charlie Field, has been forced out of the police for refusing to be taken off a case and causing embarrassment to the powers that be by solving it.  Finding himself out of a job, his friend Charles Dickens (yes, that Charles Dickens) suggests that he use the fictitious name Inspector Bucket, since it was he who originally served as the inspiration for the fictional inspector from Dickens' Bleak House, to set himself up as a private enquiry agent.

This is a fun period mystery, introducing a handful of characters who are well written and believable.  There are poignant reminders of the social inequalities and conditions for the poor and exploited in Victorian London.  The book manages to avoid being preachy despite the serious and melancholy nature of Charley's investigations, including the murder of a friend who's a prostitute.

He enlists help from several friends including Isam Jones, a chemist turned photographer (and former counterfeiter), who provides a nice scientific counterpoint to Charley's more traditional investigative methods.  He's also aided by a young constable named Mull whom I hope to see in upcoming books.

There are a number of interwoven story-lines in this book.  The plotting and dialogue are comfortable and believable.   The author manages to sew up most of the subplots while leaving enough loose threads to lay the groundwork for an overarching plotline which will support the following volume(s).

I'm a huge fan of period mysteries, especially Victorian and Edwardian English mysteries, so this was right to my taste. Other fans of period London will likely also enjoy this holiday mystery.

Disclosure: I received an ARC at no cost from the author/publisher.
at October 28, 2017