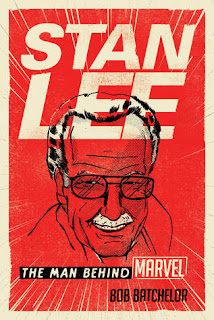 There are very few people who have lived their lives more in the public eye than Stan Lee.  He himself has never been shy about media attention and, from his teenage years has been involved in the publishing world, publicity and comics.

I grew up in a comics loving household.  (My paternal grandfather taught himself English using comic books, a love he passed on to my dad, and to me).  Since I lived near a major metropolitan city (Pittsburgh, Pa) and not impossibly distant from NYC, I got involved in the large and vibrant fandom in my area.  I've met Mr. Lee on several occasions and every single time I met him I came away with an awestruck feeling at how much energy he has and how positive and gracious and accessible he is.  I never fail to grin at his cameos in the comics films.  I have never heard anyone say he had a bad day or was cranky or ungracious when they encountered him.  He's a force of nature.

So, when I sat down to read this -meticulously- researched brick of a book (260 pages), I opened it with a little trepidation.  Would the real man behind the phenomenon have feet of clay? Was he really just a man and not the cyclone of my formative years?  He's a man who has never shied away from controversy, would the biography have an angle? An agenda?

Obviously there are many (many!) other biographies and biographical resources about Stan Lee.  His life has basically been one continual open book, lived in the public eye.  The question is really, does this particular book bring anything to the table in terms of new material or unique perspective?  I believe it does.  I don't recall ever reading much about his very early life growing up in the depression or his difficult early home life.  The author suggests that as one reason for his incredible work ethic, it could be true.  (Reminds me somewhat of the work-til-you-drop ethic of people in my grandparents' generation, which also had its genesis in the great depression).

There is a lot of content in this book.  I think it will be a valuable resource for enthusiasts, students of ephemera, and future historians. I appreciated the incredibly detailed footnotes and reference sections.  Amazingly thorough job.

Four stars
Disclosure: I received an ARC at no cost from the author/publisher.
at August 19, 2017