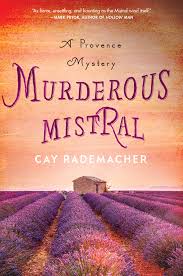 Originally published in German in 2014 as Mörderischer Mistral and translated to English by Peter Millar.
This is the first of (currently) 4 books with Inspector Roger Blanc, a captain in the anti-corruption department of the Sûreté who has been sent to Provence after a particularly sensational corruption case involving high ranking politicians in Paris.   This is the only one translated to English thus far (though I sincerely hope the others follow soon).  The translation work is beautifully done and the narrative is perfectly readable and doesn't suffer for having been translated from its original language.

The stress of Roger Blanc's job has taken a toll on his marriage, so with both the marriage and his career in tatters, he moves to a ruin of a house he inherited years before in Provence.

If that seems a slightly trite set up, what follows is a taut, beautifully paced well written book which I loved reading.

The sense of place is palpable.  The characters are believable and well written.  They're smart and clever and competent (and not provincial clods).   The setting is as much a part of the story as the characters are, along with the sights and smells of the French countryside complete with wine and local cuisine.

The culture and slow pace of life in southern France contrast well with the rather brutal murder (the first victim turns up at the local dump, burnt after being shot multiple times with a kalashnikov rifle). The pacing of the book ramps up quickly to a breathless denouement in the middle of a deadly forest fire.

I couldn't give higher praise than to say that this book reminded me of the wonderful Montalbano series by Andrea Camilleri.  I will absolutely be checking out the author and hope very much that the next books follow soon.