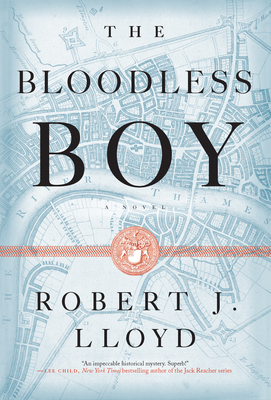 The Bloodless Boy is the first Hunt & Hooke historical mystery by Robert J. Lloyd. Originally published in 2013, this reformat and re-release by Melville House is 416 pages and is available in hardcover format. Other editions available in other formats. It's worth noting that the ebook format has a handy interactive table of contents as well as interactive links and references throughout. I've really become enamored of ebooks with interactive formats lately.

This is an exceptionally well written and researched thriller/mystery set in the latter part of the 17th century in and around London. The descriptions and dialogue are precisely rendered and believable. The story follows the renowned scientist Robert Hooke and his assistant Harry Hunt as they investigate the appalling exsanguination deaths in the area.

The author does a good job bringing the simmering religious persecution of the era to life. The fictional narrative is skillfully woven around a framework of actual historical people and incidents and it's done so seamlessly that it's not always apparent where history shades into fiction. He does a great job with the characters and even the secondary characters are three dimensional and believable.

Some parts of the book quite brutal and include descriptions of religious intolerance and the stark realities of life at a time when the average lifespan was only 35 years. I personally found it difficult to read in places due to the victim being a child of 2-3 years who had been completely exsanguinated (drained of blood), which gave me literal shudders of revulsion (which was clearly the author's intention).

Very well written and crafted. The pacing is not slow, but it's steady and worth the build-up. The denouement and resolution were satisfying. I am looking forward to the next book in the series, due out 25th Oct 2022 from the same publisher.

Four and a half stars. Highly recommended for fans of cerebral mysteries in the style of The Name of the Rose and Father Cadfael. It's not derivative, but there's something about the descriptive prose and very clever construction which reminds me of both of them.