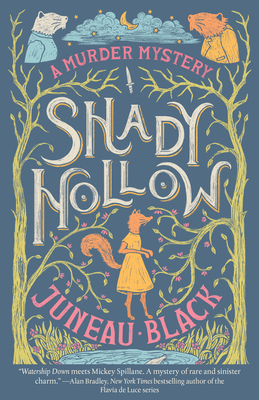 Shady Hollow is the first book in the Shady Hollow cozy mystery series by Juneau Black. Released 25th Jan 2022 by Penguin Random House on their Black Lizard Vintage Crime imprint, it's 240 pages and is available in paperback, audio, and ebook formats. It's worth noting that the ebook format has a handy interactive table of contents as well as interactive links and references throughout. I've really become enamored of ebooks with interactive formats lately

This is a whimsical and offbeat cozy with the unusual twist that all the characters are highly anthropomorphic animals who talk, have jobs, and occasionally commit crimes. The story is set in a village (Shady Hollow) and the book is replete with those oddball/eccentric small-town cozy characters. Main protagonist Vera Vixen is the local beat reporter who is investigating events after the death of a locally unloved curmudgeon (who's an actual, literal toad) .

All the standard cozy tropes are front and center: plucky reporter who can't let a mystery go uninvestigated, handsome lawman potential love interest (he's a bear), and lots and lots of village secrets. There are several disparate plot threads which are skillfully woven together into a mostly satisfying denouement and resolution.

Despite being full of talking animals with "schtick-y" alliterative names, it's definitely not a children's or juvenile book and wouldn't be appropriate for small kids. It's also not animals as characters (à la Rita Mae Brown, Lillian Jackson Braun, & co.), but more like Mandy Morton's trippy Hettie Bagshot mysteries. The characters - are - animals. They speak and go about their business like humans in animal form. They do seem to refrain from eating one another for the most part and rabbits and mice coexist mostly peacefully with foxes, mink, and bears.

The mystery was straightforward. The dialogue was a bit choppy, but not egregiously so, especially considering that this is a collaborative writing effort. There is a weird atmospheric vibe throughout, but that could just be the surreal effect of the characters being talking animals which is never addressed in any way. I had some issues engaging with the main protagonist. She strikes me as an appalling combination of gullible and obnoxious, but she is undoubtedly plucky. It's not stated explicitly, but there is also a retro vibe to the whole story. It's a short and fast read and includes a standalone plot and story.

Odd mystery. Well constructed, but off-kilter in some way which is difficult to define. It has definite shadings of noir, but is, at the heart of it, a village cozy.