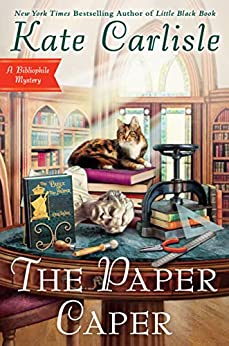 The Paper Caper is the 16th Bibliophile cozy mystery by Kate Carlisle. Published 26th July 2022 by Penguin Random House on their Berkley imprint, it's 336 pages and is available in hardcover, audio, and ebook formats. It's worth noting that the ebook format has a handy interactive table of contents as well as interactive links and references throughout. I've really become enamored of ebooks with interactive formats lately.

This is an easy breezy read. The characters are rendered lightly and are honestly sometimes a bit tropey, but it's an appealing and whimsical story. The protagonist is sweet and likeable and although she has a penchant for landing in the middle of murder and mayhem, she seems to always manage to stay kind, resourceful, and (mostly) brave. I found my suspension of disbelief yanked at a few places but at the end of the day it's a cozy mystery and while it's not egregiously silly, it is a cozy for real fans of the genre.

As the others in the series there are lots of classic book name drops for readers who like suggestions for their TBR lists. The language is clean, there is no gore, and the denouement and resolution (though a bit over the top) are well done and satisfying. The book is technically adept and quite well put together and I never found it lagging or too slow.  Although it's the 16th book in the series, it would work as a standalone, readers won't have troubles keeping up with the story, but they must be willing to accept major spoilers for earlier books if read out of order.

The unabridged audiobook from Dreamscape is narrated by Sara Young and has a runtime of 9 hours 3 minutes. I had some issues with the voice reading in the first few chapters since it's a very dialogue heavy book and the narrator was doing three different accents  and both male and female parts. The narrator did find her pacing eventually and the accents mostly straightened out after a few chapters.

Four stars. This is a perfectly fun light read in a fun series. Recommended for fans of book themed cozies.

Disclosure: I received a copy of this book at no cost from the author/publisher for review purposes. 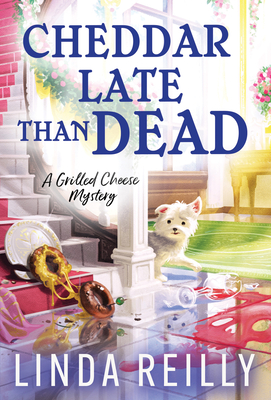