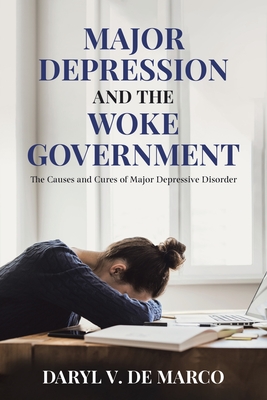 Major Depression and the Woke Government is a purportedly nonfiction look at mental health as it relates to the current US political climate related by Daryl V. De Marco. Released 19th Jan 2022 by the author, it's 122 pages (print version) and is available in paperback and ebook formats.

This is 122 pages of disorganized, ranting screed on how the media and "the left" is responsible for everything from globalization to (literally) depression. Where only adults used to be depressed, now even kids are suffering from mental illness and it's all a huge insidious plot from the liberals to poison minds and steal everyone blind.

Recently, the left has begun pumping out the propaganda to lower the bar so they don’t look like complete fools when they lose the next few elections. Their goal is to lower expectations so the dismal results they produce don’t look so bad. What I am concerned about is how they abuse the power they have now before they officially lose it. They are scurrying to get the damage done like the rats they are.

I'm glad the author has, according to himself, gotten over his mental health issues in his own way. I also applaud his apparently genuine desire to help out his fellow humans. I am alarmed and angered in about equal measure by anyone (anyone) suggesting treatment advice for a potentially life threatening complex illness who has *no* background medical education, provides *NO* real evidence based research, *NO* notes or citations, and in short, takes readers on a 120+ page unhinged rant about the "leftist media".

Beware of *anyone* who says they, and they alone, are the clever ones who will show you the way. Beware of *ANYONE* who says only they know what's really going on and they'll give you the info. Beware of *anyone* who says "do your own research" and then doesn't even bother to try to give concrete practice based information. There's a concept called "confirmation bias" and it applies to every sentence in this book (although he provides no sources).

For anyone who is dealing with major illness (somatic or mental), I encourage and beseech you to get real, professional (potentially lifesaving) help from actual medical professionals. There are local resources throughout the USA to get referrals and often sliding scale financial help. The last two years have been hard on *everyone* and anyone who *isn't* suffering probably hasn't been paying attention. Major depressive disorder is a medical diagnosis, and a serious one, and NOT something that is self-diagnosed or self-treatable in any responsible way.

One star. This is a *dangerously* irresponsibly bad book. I am truly shocked that the self-publishing house ( www.tellwell.ca ) has not insisted on any sort of disclaimer. I foresee a potentially dire legal future.