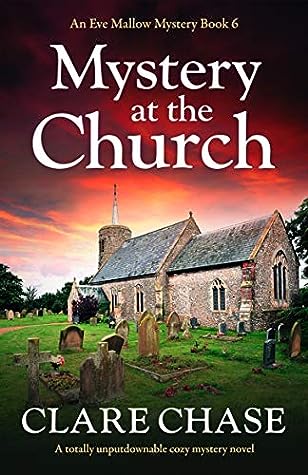 Mystery at the Church is the 6th book in the Eve Mallow village cozy series by Clare Chase. Released 4th Aug 2021, it's 265 pages and is available in paperback, audio, and ebook formats. It's worth noting that the ebook format has a handy interactive table of contents as well as interactive links and references throughout. I've really become enamored of ebooks with interactive formats lately. For Kindle Unlimited subscribers, this book is currently included in the KU subscription library (along with the rest of the series) to borrow and read for free.

This is a technically adept and well written book. The characters are distinct enough to keep them clear in readers' minds, and the dialogue flows fairly well. There's maybe a trifle too much emphasis on hearsay and gossip (and many of the central characters are middle aged and female and a trifle trope-y), but it's not egregious and I didn't find myself being irritated over it whilst reading. Main protagonist Eve's love/hate relationship with the local constabulary, and her secret relationship with a former detective who is lying low in the district for his own protection after a high profile case in London, add some interest and conflict. The book is peppered with actors and amateur dramatics characters who provide eccentric and light drama.

There were several seemingly disparate plot threads which intertwined into a satisfying denouement and resolution. Despite being the sixth book in the series, it worked well enough as a standalone, though there are some minor spoilers for earlier books if read out of order. I was engaged enough with the writing and the mystery, that I intend to pick up the previous books in the series. This would be a good one for readers who enjoy binge-reading series.