Fire And Cinder (Fairy Tales of the Magicorum #6) 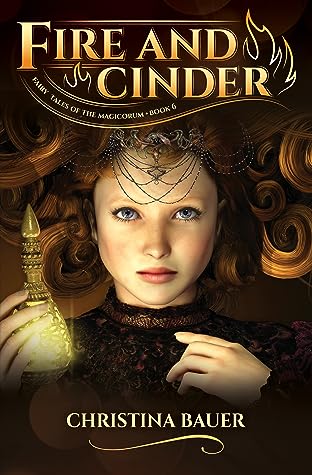 Fire And Cinder is the 6th book in the Magicorum series by Christina Bauer. Originally released in Feb 2021, this reformat and re-release from Monster House is 320 pages and is available in ebook and paperback formats.  It's worth noting that the ebook format has a handy interactive table of contents as well as interactive links and references throughout. I've really become enamored of ebooks with interactive formats lately; it makes it so easy to find information with the search function.

This is an easy to read, very very light cozy paranormal romance novel aimed at YA readers. The book is written in alternating first person perspective and labeled in the chapter headings which character is being written. They're full of snarky sarcastic dialogue and action driven. The main characters' arcs are written throughout the previous 5 books in the series, but can certainly be read out of order without any confusion.

The books are full of fractured fairy tale archetypes and riffs on classic fairy tales. The happily-ever-afters are not easy to attain and there's a metric ton of crisis and drama and tortured teenage angst and longing between the start and finish.

I'm about 4 decades outside the target audience (older teens and YA), but I am confident that they'll be gobbled up by the readers for whom they're intended. There is a little bit of rough language, but nothing which would raise an eyebrow in the average school hallway.

The dialogue is sometimes eye-wateringly sarcastic, but again, for readers in the target audience, that will likely be a plus and not at all negative. This would be a good series to binge, since book 8 has just dropped. For fans of Twilight, Marissa Meyer's Lunar Chronicles, and similar, these books will fit the bill.

Three and a half stars for this entry, rounded up for quite competent writing and plotting. I would imagine it will likely be higher for the target audience.