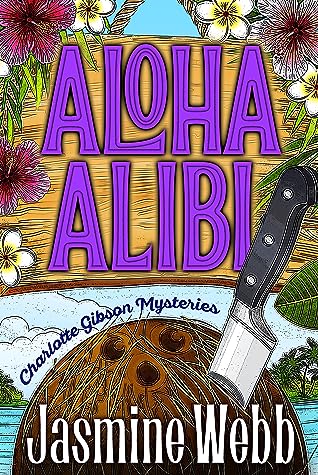 Aloha Alibi is the first book in a new cozy mystery series by Jasmine Webb. Released 8th June 2021, it's 272 pages and available in hardcover, paperback, audio, and ebook formats. It's worth noting that the ebook format has a handy interactive table of contents as well as interactive links throughout. I've really become enamored of ebooks with interactive formats lately.

This is a undemanding and fun small-town cozy mystery with a young female protagonist set in Hawaii. The largely female cast is filled with quirky humorous characters including two septuagenarian sleuths who are also determined to solve the mystery and claim the reward for the murder of a New York property developer who was on the island to put the finishing touches on a wildly unpopular glitzy resort when he got himself stabbed. In addition to Charlotte "Charlie" Gibson, and the aforementioned amateur private investigators who are in their 70s, readers also meet Zoe, Charlie's best friend, who is her sensible and logical buddy, and who works as a physician in the local hospital.

There are a lot of trope aspects included: a slow burn romantic interest (who is, of course, the handsome local lawman), a collection of eccentric small-town oddballs for local color, political corruption, and Charlie's mom, who is by turns warmly sympathetic and cringe-inducingly inappropriate. The dialogue aims for very light bantering humor and mostly succeeds. Some of the dialogue is so unrealistic that it yanked me out of the story, but mostly, it's standard for the subgenre. The author does a good job with including enough backstory to move the narrative along without drowning readers in too much info.

There are several intertwined plot threads including why Charlie's moved back to Hawaii (she's on the run from Seattle gangsters), the murder of a businessman (there's a substantial reward offered for solving the crime), best friend Zoe's issues with a stalker, and corruption and bribery in local island government.

The unabridged audiobook version has a run time of 6 hours and 13 minutes and is capably narrated by Khristine Hvam. There are both male and female characters of a range of ages, and she keeps them distinct and perfectly understandable. The sound and recording quality and production values are high throughout the recording.

It's a very lighthearted, often silly, humorous cozy mystery with fun characters and a satisfying denouement and resolution. The solution was foreshadowed fairly heavily, but there were a couple of twists in the climax which, although completely over the top, added some excitement.