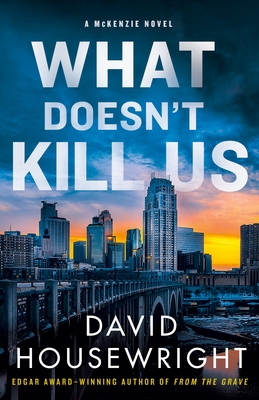 What Doesn't Kill Us is the 18th PI procedural mystery featuring McKenzie written by David Housewright. Released 25th May 2021 by Macmillan on their Minotaur imprint, it's 352 pages and is available in hardcover, audio, and ebook formats. It's worth noting that the ebook format has a handy interactive table of contents as well as interactive links throughout. I've really become enamored of ebooks with interactive formats lately; it makes it so easy to find information with the search function.

This is a departure for this series because it's told in first person retrospective. McKenzie himself has been shot and is unconscious and in a coma for most of the book. Though it's the 18th book in the series, it works pretty well as a standalone and the author is adept enough to give enough background without overloading readers with unnecessary detail.

The plotting is well crafted with several subplots including solving McKenzie's shooting, the criminal underworld, and a well connected ultra-rich tech fortune family complete with infighting and inheritance disagreements. McKenzie is an inveterate favor-granter to his friends and this time he's gotten himself mixed up in something that's nearly gotten him killed.

The whole book felt like a visit with characters the fans of the series have been following for almost 20 years. I did appreciate that the author didn't leave the "did he die or not" plot element hanging, he resolved it from the first page, with McKenzie himself narrating. There's plenty of dramatic tension to be found throughout and I also liked that the supporting ensemble of characters get a starring role in this book.

Recommended for fans of PI procedurals. The language is R rated. There's some light sexual content, but nothing on page. There is some violence and blood.

Four and a half stars.