Under the Whispering Door 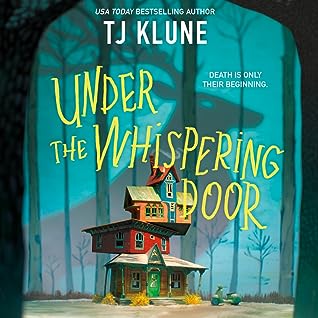 Under the Whispering Door is a wide ranging character driven creative fantasy by TJ Klune. Due out 21st Sept 2021 from Macmillan on their Tor Forge imprint, it's 390 pages and will be available in hardcover, audio, and ebook formats. It's worth noting that the ebook format has a handy interactive table of contents as well as interactive links throughout. I've really become enamored of ebooks with interactive formats lately.

This is an odd and interesting book. The plot is entirely character driven and set almost completely in one single place - an odd interworld teashop between life and the afterlife. Characters come and go as they move on to whatever comes next. The characters are both living, dead, in between, and otherworldly/demigod/angel-ish, and they vary in age from very young to very old and of several genders and ethnicities. There was so much crammed into the book that some of it fell inevitably by the wayside. In addition to being a fantasy, philosophical examination of death and what comes after, it's also about using the time we have wisely, found family, loyalty, love, consent, oh, and a queer/bi love story as well. The drama, starcrossed lovers, and longing would have been more suited to a YA/NA novel, but the subject matter and some of the scenes are too heavy to comfortably fit into that genre.

In addition to all the other stuff going on, there's a lot of slapstick involved which felt oddly tacked on; people getting stuck in inappropriate clothing and "psychics" being chased around by poltergeist(ish) flying inanimate objects. The subject matter in general is very heavy and quite dark and it felt like the author was trying very hard to lighten the mood. The love story and denouement were satisfying but also felt a bit contrived. The language is R rated and there are frank discussions of death including suicide, murder, and death of a child. There is some light consensual sexual content.

The audiobook version has a run time of 14 hours and 55 minutes and is expertly narrated by Kirt Graves. He manages characters of both sexes and a range of ages and manages to keep them distinct from one another and easy to understand. The sound and production quality are high throughout.

It's an interesting and valiant attempt, but in my opinion doesn't quite fulfill its early promise. The author is undeniably gifted and adept, but I never felt like it quite lived up to the attempt. Three and a half stars, rounded up (the writing is strong).