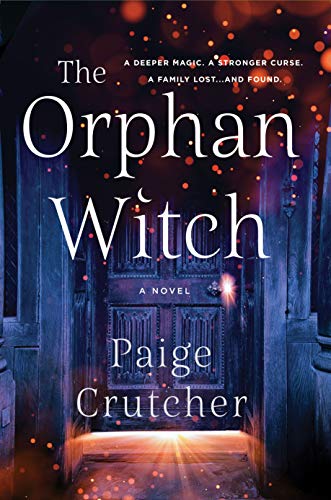 The Orphan Witch is a well written and engaging paranormal YA/NA story by Paige Crutcher. Due out 28th Sept 2021 from Macmillan on their Griffin imprint, it's 352 pages and will be available in hardcover, audio, and ebook formats. It's worth noting that the ebook format has a handy interactive table of contents as well as interactive links and references throughout. I've really become enamored of ebooks with interactive formats lately.

The world building and characterization are the highlights of this creative novel. It's a character driven crossworlds fantasy with a chosen-one trope and a strong element of romance and a bonus drizzle of time travel.  The writing is competent, but skates very near the ledge with regard to overwrought tortured simile and light purple prose. I found myself rolling my eyes fairly often and at a couple of points, skimming a bit to get past particularly egregious descriptions. If the characters had rolled their shoulders or necks one more time (so help me), I was calling the chiropractor. The cursing is average, a smattering of lesser rugged cursing and a few "f-bombs". There are somewhat positive depictions of LGBTQIA+ attraction in the book (one main character, Hyacinth, is gay, or possibly bi).

The audiobook version has a run time of 14 hours, 7 minutes and is beautifully narrated by Saskia Maarleveld. She reads clearly and well and imbues the characters with distinct voices and personality. I was impressed with her facility with dialogue especially; scenes with different characters in conflict, and she managed to imbue them with distinctly different tone and expression. The sound and production quality is very high throughout. Despite the scenes which made me roll my eyes a bit, her voice remained pleasant to listen to.

Three and a half stars. It's a diverting read/listen and would be a good choice for library acquisition, and for fans of NA fantasy romance.

Disclosure: I received an ARC at no cost from the author/publisher for review purposes.
at September 26, 2021