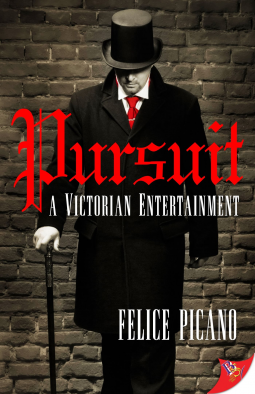 Pursuit: A Victorian Entertainment is a well written period mystery with a somewhat ruthless anti-hero protagonist written by Felice Picano. Released 11th May 2021 by Bold Strokes Books, it's 242 pages and is available in paperback and ebook formats. It's worth noting that the ebook format has a handy interactive table of contents as well as interactive links throughout. I've really become enamored of ebooks with interactive formats lately; it makes it so easy to find information with the search function.

This is an undeniably well written and plotted Victorian thriller written in epistolary style. The language and dialogue give it a period feel with the main character's letters to his employer, the Exchequer of England, moving the plot forward and describing his efforts to find a marchioness who has run away or been kidnapped. In this service he tracks her across Europe and has numerous dalliances along the way.

The story is liberally interspersed with descriptions of dalliances. Main character Addison is pansexual and voracious (and, apparently, insatiable). The naughty parts of the book are written in period style as well, so they're not really graphic, and leave a little to the imagination which was nice.

The denouement and resolution are satisfying, if a bit happily-ever-after. This is a book I enjoyed quite a lot. Due to the sexual content, I don't think it would generally be a good fit for public library acquisition, but is written well and would be great for readers of historical mystery who don't mind erotica in their reading material.