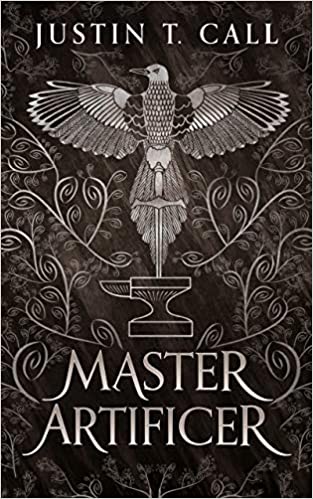 Master Artificer is the second book in The Silent Gods trilogy by Justin T. Call. Released 18th May 2021 by Blackstone, this massive volume is 857 pages and is available in most formats.

I won't give a precís, other reviewers have done that. I will say that despite being a hefty doorstop fantasy (the kind with maps at the front of the book), the action and characters move the plot along at a good pace - I never found the story dragging. There's a fair amount of graphic violence along with frank descriptions of darkness and pragmatically evil choices.

There will be inevitable comparisons between this book (and presumably the rest of the series) and Harry Harrison, Guy Gavriel Kay, and Brandon Sanderson. I submit that the series thus far compares very favorably and I'm  cautiously excited to see what's in store in future from this author. Definitely one to watch.

It's important to note that this book is -very- dark in places and I found myself torn between wanting to go on and being sad and somewhat afraid of reading what comes next. There's political action, campaigning, skulduggery, questing, magic and everything for the classic political fantasy fan. I will say right away that I believe that this book would suffer greatly by attempting to read it as a standalone. There's way too much backstory and context necessary to be read by itself (although the author does spend a fair bit of the page count recapping things that went before). Although the author includes an extensive dramatis personae at the beginning (along with the requisite maps)  it's not a trivial task to keep everyone straight and remember who is trying to kill whom.