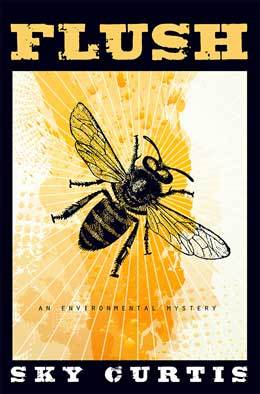 Flush is a humorous midlife crisis murder mystery by Sky Curtis. Released in print in May 2017, the audiobook is due out 15th Oct 2021 from Inanna. The book is (or will be) available in paperback and ebook formats. The print version is 312 pages.

This is a murder mystery with an amateur sleuth who's middle aged, overweight, lonely, desperate, and alcoholic. The author spends *pages* describing cellulite, saggy arms, chins, and wrinkles. Some readers might find the constant harping on her physical characteristics funny, to me they just seemed sad and bullying. The characterizations are trope-y and two dimensional (chain smoking hard@ss editor, dithery but well intentioned main character, lesbian friend who constantly makes passes at her (and any other female within 500 miles), jerk-y sexist rich guy businessmen, society trophy wives, etc).

There were major problems for me in the narrative. The main character is supposed to be an intelligent media professional but she's constantly dithering, impractical, panicked, and falling to pieces about really weird and inconsequential things. Her internal monologue was so cringe-worthy most of the time. I was often yanked out of the story by oddly written phrases and dialogue. When she learns about a death early in the narrative, her colleagues all immediately look at her and more or less convince her she's going to be the primary suspect in the investigation. The pacing just never gelled for me. There is quite a lot of "telling" and almost no "showing".

Humour is difficult to write and I felt that the author was going for a Kinsey Millhone vibe and it just never got there for me. The language is R rated and there's also quite a lot of unnecessary body objectification (of both men and women).

The unabridged audiobook has a run time of 10 hours and 30 minutes and is narrated by Rebecca Jenkins. She does a fairly good job of individual character voices, but two of them, chain smoking Shirley and BFF Cynthia were like nails on a chalkboard. Shirley was more difficult to listen to than Cynthia for me personally because I got used to the nasal Fran Drescher-esque quality after a while.

Three stars for both the print and audiobook versions.