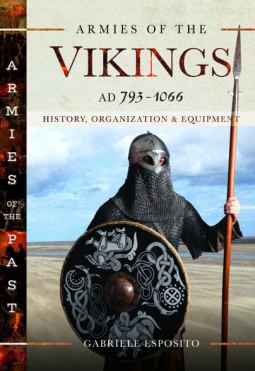 Armies of the Vikings, AD 793–1066 is a capsule survey of the expansion and exploration by Scandinavians, collated by military historian Gabriele Esposito. Due out late Oct. 2021 from Pen & Sword, it's 176 pages and will be available in hardcover and ebook formats.

This is one of a series of books on ancient military history by the publisher with similar layout and historical overview. They're accessible to the average layman with some background in military history and the language is clear and understandable. The work is not rigidly academic; it's not annotated and there are no chapter notes. The author has included an abbreviated bibliography including some contemporaneous primary sources, but most of the work he's based this work on are secondary histories and modern re-enactors (primarily five different groups of modern living history re-enactors: Jomsborg Vikings Hird from Poland, Brokkar Lag from Spain, Sjórvaldar Vikings from the United States of America and Confraternita del Leone/Historia Viva from Italy); there are also resources and links appended to some of the sources. That's not necessarily a *bad* thing, but it is something to know going into the read.

There are a number of photographs; they're mostly from the aforementioned modern historical re-enactor groups. I found the actual information was presented somewhat haphazardly and difficult to find again. The timelines hop around quite a bit, and the chapters end quite abruptly. The photographs (which are the book's best feature) are scattered throughout the text capriciously.

Four stars. I think this would make a good choice for modern readers interested in costume re-enacting groups like the SCA, serious cosplay, and similar. It would also be a good choice for readers who are already invested in this series from the publisher.