Nobel Life: Conversations with 24 Nobel Laureates on Their Life Stories, Advice for Future Generations and What Remains to Be Discovered 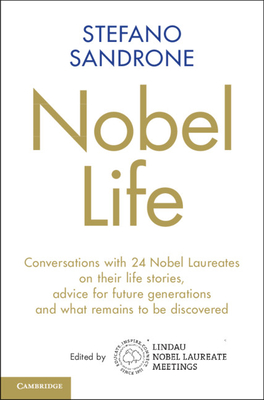 Nobel Life is a collection of essays and interviews with 24 Nobel Laureates and includes short biographies, advice and observations. Due out 29th July 2021 from Cambridge University Press, it's 230 pages and will be available in hardcover and ebook formats (ebook available now).

I certainly understand that there's a huge gender (and socioeconomic) gap in the awards and selection (and indeed in representation in STEM especially at all levels), but there are only two women listed in these 24 interviews, which I found disappointing. The official statistics (discussed in the book) are around 17:1, so having two female laureates out of 24 interviews could be interpreted as more than fair (I guess). The interviewees are drawn from the worldwide scientific and economic community and from lots of backgrounds.

One thing that struck me in interview after interview was how recently so many things which are rock solid basic biology and physiology (taught and used in undergraduate level courses), and how many apparatus and procedures were discovered. Nearly all of them were things which were discovered, developed, and recognized during my lifetime (and I'm not *that* old).

Many of the questions and interview formats were similar and it was interesting to read both how the laureates answered and the similarities (and differences) in their answers when faced with the same questions.

This would make a superlative choice for library acquisition, as well as for readers who enjoy science writing and biography. Although the interviews are mostly drawn from scientists who received the Nobel for contributions in chemistry, physiology & medicine, physics and so forth, it's not necessary to have a scientific background or knowledge to read and enjoy the interviews.

Five stars. Well written and interesting with insights into a world most of us will never experience.