The Killer of the Princes in the Tower: A New Suspect Revealed 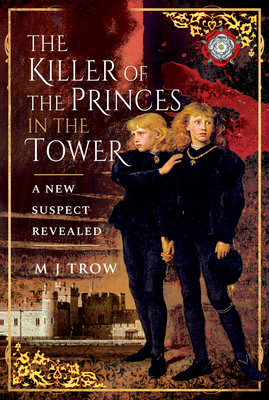 The Killer of the Princes in the Tower is a new look at the 600 year old mystery of the disappearance and probable murder of the young deposed King Edward V and his younger brother Richard, Duke of York. Released 9th June 2021 by Pen & Sword, it's 248 pages and is available in hardcover and ebook formats.

I enjoyed this true crime examination of a historical mystery which has captivated imaginations for centuries. Although undeniably a terrible tragedy, through the lens of the subsequent 600+ years, the horror and pathos gives way (somewhat) to historical interest. There have of course been numerous good historical accounts and I confess I was first drawn in and deeply affected by Josephine Tey's take on the case and moved into the Ricardian camp. I also followed the archaeological dig and reinternment of Richard III from an ignominious car park in Leicester to the cathedral there.

I found the author's style both accessible and interesting. Most histories begin with (as my professors used to say) telling the reader what the author is going to say, saying it, and then concluding with what they've just said. This book is more of a mystery style offering. The author gives a fairly comprehensive and understandable background of the political and cultural situations of the time as well as the major players. He follows up by examining (and discarding) the "usual suspects" who are generally regarded as culpable and includes an overview of the less likely culprits. He then introduces a (to-me) unexpected alternative and slowly builds up a compelling and plausible picture of what may very well have happened. The whole plot turns on its simple plausibility. It definitely *could* have happened as written.

I enjoyed the author's meticulous examination and correction of some inaccurate translations which have slowly ossified into accepted canon. One of the problems of necessarily writing and interpreting history based on later accounts (since much of the first person record is lost or destroyed) is that mistakes (and intentional misinformation) can easily creep in and be accepted and built upon by all that follows. Here, the author has stripped away much of the accepted history and at least tried to see it without the trappings which have built up over the last centuries.

It's not likely that we'll ever find incontrovertible proof one way or the other, but I'm really fascinated by the absolute logical plausibility of Trow's account of what might well have happened - as well as the staggering effects on history the guilty party might well have had, if the account is mostly true as written.

This would make a superlative selection for public or school library acquisition, home library use, or as a nice gift for a history loving reader. The language is accessible to older (post secondary school) age and up. The appendices include an abbreviated bibliography and index. The gallery of illustrations includes facsimile drawings of building layouts and photos of relevant buildings as well as portraits of some of the dramatis personae.