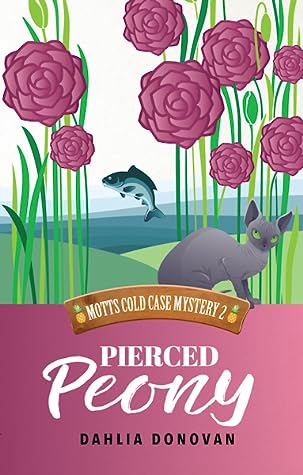 Pierced Peony is the second book in a cozy murder mystery series by Dahlia Donovan. Released 1st May 2021, it's 199 pages and is available in paperback and ebook formats. It's worth noting that the ebook format has a handy interactive table of contents as well as interactive links and references throughout. I've really become enamored of ebooks with interactive formats lately. It makes it so easy to find info with the search function.

Although it's the second book in the series, it works well enough as a standalone. The author is adept at providing the necessary backstory without info-dumping. The plot moves along at a good pace and the scenery and interaction between the characters are engaging and well written. The characters are -all- quite quirky, several (including the main protagonist) are neurodivergent. That's not a bad thing, but it is noticeable and permeates the whole of the story. One of the things with which main character Mott struggles is serious anxiety. Some of the descriptions of her anxiety episodes are quite heartrending and might potentially be triggering to some readers. I liked that she and her friends help and support one another no matter what.

Mott's friends and her pets (one sphinx cat, one turtle) along with Mott herself solve the mystery - which is a good thing, given the utterly useless official investigation. For readers outside of the British Isles, the spelling and vernacular are British English (tyre, flat, crisps), but should pose no difficulty for readers.

I did enjoy this installment enough to compel me to go seek out the first book in the series. It's also nice to see neurodiversity and representation in media.