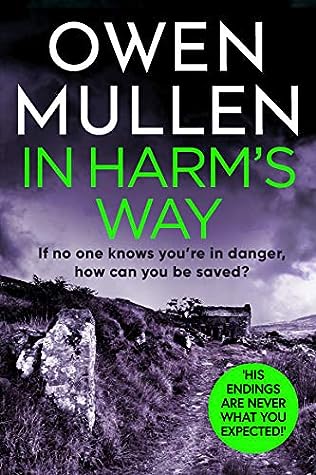 In Harm's Way is the first book in a psychological thriller series by Owen Mullen. Originally released in 2018, this reformat and re-release from 23rd March 2021 is 254 pages and available in audio and ebook formats. It's worth noting that the ebook format has a handy interactive table of contents as well as interactive links and references throughout. I've really become enamored of ebooks with interactive formats lately. For Kindle Unlimited subscribers, this book (and the sequel) are currently included in the KU subscription library to borrow and read for free.

Although referenced as Scottish noir, this is a psychological thriller and gave me more of a Gone Girl vibe than anything else. More than the first half of the book is character driven and consists of watching an extended family of unpleasantly dysfunctional people scream and throw things at one another. It took three or four attempts for me to get far enough into the book to read the parts with the actual abduction and crime solving. Once they got underway, the pace did pick up substantially.

The author writes capably. The technical aspects of the plotting and characterizations are well done and the whole flows well stylistically. Readers who are fans of brutal psychological thrillers will likely find much to enjoy here. The book does contain a fair bit of torture, domestic violence, psychological and physical abuse, substance abuse (alcohol), and rough language. The climax and denouement were foreshadowed fairly heavily, but well written nevertheless.

Three and a half stars. Recommended for adult readers due to content and language.