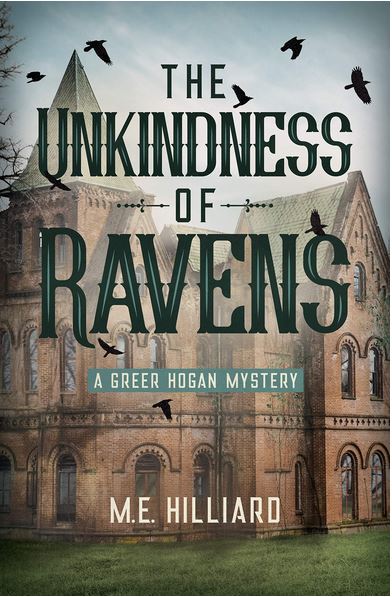 The Unkindness of Ravens is the first book of a new cozy series featuring a librarian by M.E. Hilliard. Released 13th April 2021 by Crooked Lane, it's 336 pages and is available in hardcover, audio, and ebook formats.

This is a promising series opener from a debut author who has worked as a librarian and seems to have a similar background in high-end retail fashion as protagonist Greer. The librarian-dog-cozy-murder-smalltown-mystery sub-subgenre is always fun and this is a well written example. The murders are off-scene and mostly bloodless, there's no graphic content, the language is fairly clean, the characters are likeable and intelligent and there are a plethora of suspects and lots of red herrings. The narrative arc is well controlled and the plot moves along at a good pace. I never found my interest flagging at any point in the read. There's a sort of Agatha Raisin vibe going on with big city girl Greer taking up a position as a librarian in a small-town public library. She's smart and fashion conscious ("Is that Prada?") and sophisticated as well as vulnerable.

Since it's a librarian cozy, there are of course book tie-ins and title name-dropping. One of my favorite features of librarian cozies is the suggestions for titles, series, and authors with which I was previously unfamiliar. I found a couple of good ones to follow up on as a nice bonus. I suspect most of the titles and series mentioned will be familiar to most readers. The Patricia Wentworth mention was especially nice, and I've been revisiting Miss Silver all weekend because of it.

The climax and denouement are well done. It is a fun cozy and full of the things which we all love about small-town cozies (including an adorable French bulldog!).

Four stars. Highly recommended to fans of the genre.

Disclosure: I received an ARC at no cost from the author/publisher for review purposes
at April 16, 2021