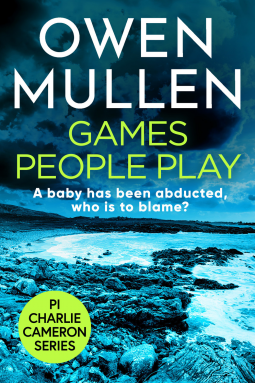 Games People Play is a psychological PI thriller and the first book in the Charlie Cameron series by Owen Mullen. Originally published in 2017, this reformat and re-release is out 20th April 2021. It's 334 pages in print format and available in ebook format. (Other editions available in other formats). It's worth noting that the ebook format has a handy interactive table of contents as well as interactive links and references throughout. I've really become enamored of ebooks with interactive formats lately. For Kindle Unlimited subscribers, this book is currently included in the KU subscription library to borrow and read for free.

This is a well plotted, taut, and sometimes graphic PI thriller. Protagonist Charlie specialises in missing persons (but not kids). He's drawn unwillingly into a case with a near drowning incident alongside an abduction which soon spirals out into murder and more. There are a number of entwined subplot threads and lots of false/misleading clues which resolve satisfyingly at the end.

The characterisations are well rendered and distinct. I had no trouble keeping the characters sorted out and I didn't get yanked out of my suspension of disbelief by clunky dialogue or out-of-character actions. The language is R rated, there are potentially sensitive/trauma inducing scenes including child abduction, drowning, rape, drug abuse, and neglect. A fair bit of this book is quite dark and atmospherically dank and chilling. Although it's set in Scotland, in a lot of ways it reminded me of the Jack Taylor books (set in Ireland).

I liked the music/bar subplot elements and the descriptions of the music and musicians added a lot of flavour to the book. The vernacular and spellings are British/Scots English.

Four stars. I would recommend this one to fans of Ann Cleeves, Ken Bruen, and Angela Marsons.