Animus Mundi: Tales of the Spirit of Place 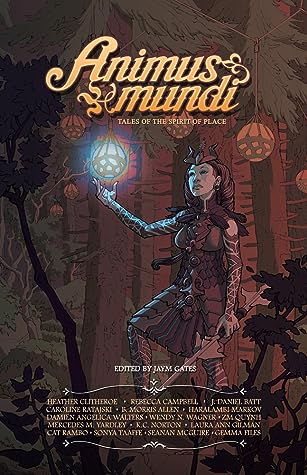 Animus Mundi is an anthology of short fantasy/light horror fiction edited by Jaym Gates. Released 7th Jan 2020 by Outland Entertainment, it's 169 pages and is available in paperback, audio, and ebook formats. It's worth noting that the ebook format has a handy interactive table of contents as well as interactive links. I've really become enamored of ebooks with interactive formats lately.

There are a number of standout stories in this collection and I felt all of them were well written and worthy of inclusion here. It first struck me as an odd angle to write an anthology around, but as the 16 capable authors have such different viewpoints and the stories represent a whole world of different cultures and traditions, it adds a depth and richness to the whole which would have been lacking in the individual stories read singly. There was some neat synergy going on which elevated the whole.

There are a number of very well known names here from the speculative fiction genre. There are also a number of new-to-me authors and one reason I've always loved anthologies is the chance to find new creators to follow, and in that respect, this one delivers.

One slightly confusing detail: for readers who see the publicity release info provided by the publisher which states "Genius Loci is a huge anthology of 31 all-new fantasy and science fiction stories drawing on the rich tradition of place-as-person. Within its pages, the authors present stories of sentient deserts, beneficent forests, lonely shrubs, and protective planetary spirits, highlighted by the fantastic art of Lisa A. Grabenstetter and Evan M. Jensen." in reference to this collection, Animus Mundi - it appears that the latter is a reformat and re-release of 16 stories (without additional art) which originally appeared as a part of Genius Loci, by the same editor and publisher, released in 2020.

Nevertheless, the stories which did make it into this edition were well written and engaging. Not all of them appealed to me personally (trigger warning: themes of suicide), but that's sort of the point of anthologies. The stories individually range from solid 3+ to 4+ stars, and for me personally, the collection is a 4 star read. I do confess I'm curious about whatever legalities led to the reformat and re-release being 15 stories and enhancement art lighter than the original release, but whatever the reason, this one is worth checking out on its own merits.