A Conventicle of Magpies 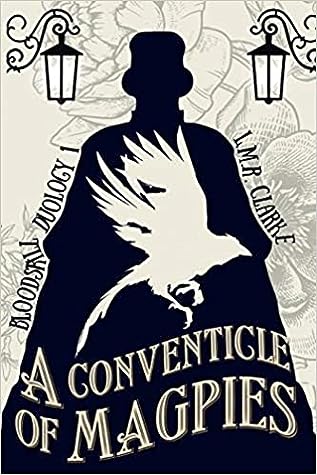 A Conventicle of Magpies is a Victorian era gaslamp fantasy and the first book of a new duology by L.M.R. Clarke. Released 6th Jan 2021, it's 178 pages and is available in paperback and ebook formats. It's worth noting that the ebook format has a handy interactive table of contents as well as interactive links and references throughout. I've really become enamored of ebooks with interactive formats lately. For Kindle Unlimited subscribers, this book is currently included in the KU subscription library to borrow and read for free.

There is a lot to unpack here. Overall, it's a well written and engaging YA paranormal fantasy with an ensemble cast of (mostly) female protagonists. They belong to a motley gang of the local ethnic minority who are sneak thieves, cat burglars, pickpockets, and "problem solvers" (but no murder). The paranormal element comes from blood based magic (trigger warnings for blood, violence, suicide, trauma, etc). The characters are well rendered and distinct. I had no trouble remembering who was who. There is a Jack-the-Ripper subplot whose many victims are exsanguinated carefully (blood magic, again). There are several intertwining plotlines and not all of them are resolved by the end of the first book, strongly foreshadowing the second book in the series.

I liked the LGBTQ+ positive character portrayal and found myself engaged and invested in the story. There is some strong language and mature content here (mostly violence and mature themes, not for the sexual content which isn't egregious).