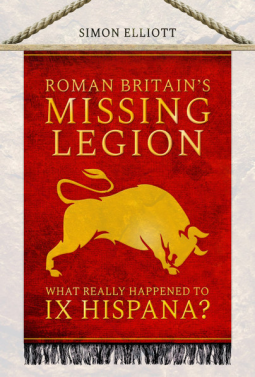 Roman Britain's Missing Legion is an appealing military history book combining the best parts of historical mystery and meticulously researched and annotated exposition presented and set out by Dr. Simon Elliott. Due out 22nd March 2021 from Pen & Sword, it's 208 pages and will be available in hardcover format.

The book is meticulously written, with numerous quotes throughout. It is not annotated, and there are no chapter notes in the eARC which I received for review. I found that the narrative flowed quite a bit better because I wasn't constantly stopping my reading to check references. The author has cited both period and modern scholarly research to support the narrative. There are numerous notes, timelines, and an index. The bibliography notes alone will keep keen readers reading for ages. Probably the most engaging part of the book for me were the numerous photos of buildings and artifacts which give a comprehensive context for the history. I enjoyed the photos (black and white) as well as the numerous timelines and data tables which are included.

The author has a casual academic style of writing; accessible and careful, but not overly convoluted or impenetrably difficult to read. He manages to convey a wealth of information without being pedantic or preachy. I imagine he would be a capable and talented teacher. I envy his students. He writes clearly and concisely with a logical progression and a clear threads to follow which interweave the real and imagined history, backed by a plethora of sources. Where actual contemporaneous sources shade into speculation, he says so clearly and unambiguously.

Five stars. This book is clearly the product of a prodigious amount of research by an author who is a bona fide expert in this field.