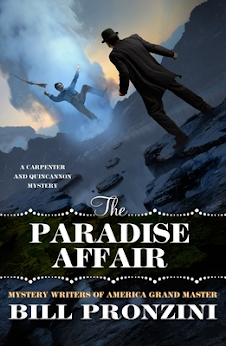 The Paradise Affair is the ninth outing for husband and wife investigators Carpenter and Quincannon by the talented and capable Bill Pronzini. Released 26th Jan 2021 by Macmillan on their Tor Forge imprint, it's a compact 176 pages and available in hardcover, audio, and ebook formats. It's worth noting that the ebook format has a handy interactive table of contents as well as interactive links throughout. I've really become enamored of ebooks with interactive formats.

Most readers have their favorite authors/series. The must-reads.. and the ones which come highly anticipated. These books are on my list. They're consistently well written, always entertaining, cleverly plotted, well paced, and intricately put together. The story is told in alternating point of view (mostly alternating by chapters and clearly labeled in the chapter headings). This allows the author to incorporate two mysteries within the book and allow for independent denouements with a final wrap up at the end.

The exotic destination (Hawaii at the end of the 19th century) is well researched and based around a historical framework of period events and characters. The author is quite skilled at interweaving actual and fictional events seamlessly into an entertaining whole. Although the plot works fine as a standalone, there are some spoilers for earlier books in the series, so I do recommend them in order for completists.

Four stars. Solidly engaging and capably written. I'd recommend this one to fans of the private enquiry agent historical mystery genre, as well as previous fans of the series.