Someone to Watch Over Me (Spenser #48) 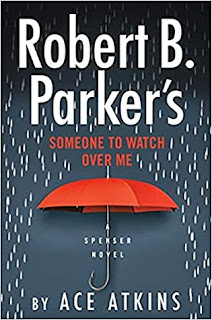 Someone to Watch Over Me is the 48th (!!) Spenser novel, and the 9th (by my count) written by Ace Atkins after Mr. Parker's death. Due out 12th Jan 2021 from Penguin Random House on their G.P. Putnam's Sons imprint, it's 400 pages and will be available in hardcover, audio, and ebook formats.

I've been in love with this series since book 1 (The Godwulf Manuscript) and I was really sad when the author passed, thinking that I would have to confine myself to re-reads to get my Spenser/Hawk fix. I was nervous about someone else taking over the writing, but have been really impressed and happy with the newest books in the series.Other reviewers (and the book's blurb) have set up the plot quite well. I'll just add that all of the elements which made us fall in love with Spenser & co. from the start are here also. The characters (trigger warning, exploitation of minors, and sexual exploitation are themes) are ripped from recent news headlines (including a "fantasy island" which hearkens to the relatively recently departed unlamented Jeffry Epstein and his henchpeople). Because the theme is so triggering and horrific, I will say there's no direct graphic sexual content, but there are descriptions of abuse (not graphic) during interviews with victims which were somewhat difficult for me to read. I mostly skimmed over those. They certainly weren't used egregiously, they were integral to the plot, but they were rather difficult to see.

It's a solidly written PI murder mystery with an indelible American flavor. Boston's local atmosphere and settings are a vital part of the book. I love Spenser's relationship with Susan (smart, funny, capable, and real) and the interplay between Spenser and his compatriots. I loved the sarcastic wit and real humor and repartee in the dialogue. I'm obviously a solid fan of this series, and my opinion wasn't dented one tiny bit by this latest adventure. Ace Atkins isn't Robert B. Parker, but he's pretty darned close. Five stars for fans of the series. Probably four to five for new readers who enjoy gritty American PI adventures.Disclosure: I received an ARC at no cost from the author/publisher for review purposes.