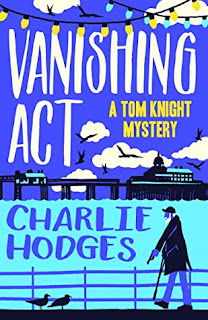 Vanishing Act is the debut novel in a new PI murder mystery series by Charlie Hodges. Released 17th Sept 2020 by Farrago, it's 286 pages and available in paperback and ebook formats. It's worth noting that the ebook format has a handy interactive table of contents as well as interactive links and references throughout. I've really become enamored of ebooks with interactive formats lately.

I tend toward a reading list that's heavily weighted toward the stately home golden age refined British mysteries, so finding this gem of a modern day fairly gritty PI mystery with a geriatric ex-SAS officer protagonist was a surprise to put it mildly. I was admittedly hooked from the first chapter and the pace didn't let up and it kept me reading straight through. The dramatis personae are varied and interesting and well fleshed-out. Aside from Tom Knight (ex-SAS former badass 73 year old trapped inside a treacherous body suffering the ravages of time and the abuse to which it's been subjected over the years), and his sidekick Merv, the author has provided a plethora of suspects from which to choose (including one very corrupt policeman who was both annoying -and- incompetent).

The disparate plot threads wind tighter and eventually resolve into a wistful resolution. The book is eminently readable and enjoyable. There are flashes of true wit and self deprecating humor. The author has manfully avoided the cheap age-ist humor which most would've included. Tom is a sympathetic and well drawn character and despite his foibles (charging headlong into danger with a very dodgy knee), he's likeable intelligent and well drawn.

Four stars. I'll be looking for future installments with anticipation.