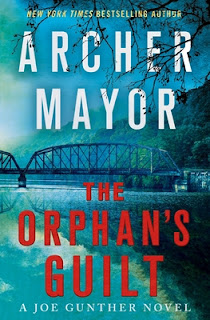 The Orphan's Guilt is the 31st Joe Gunther novel by Archer Mayor. Due out 29th Sept 2020 from Macmillan on their Minotaur imprint, it's 288 pages and will be available in hardcover and ebook formats. It's worth noting that the ebook format has a handy interactive table of contents as well as interactive links. I've really become enamored of ebooks with interactive formats lately.

I've read some (not all) of the previous books in the series and this one is similar in some ways. It's a procedural with the VBI playing a central role. The ensemble cast is well written and the characters are believable and three dimensional. The opening sequences seemed a little slow to me (it starts with a traffic stop leading to a DUI arrest) and just the setup for this extremely convoluted mystery takes about 30% of the book. The writing is (as always) top notch, so it's a pleasure to read, but it is quite slow to start.

I liked the fact that so many disparate characters had active and important roles in the book - investigative journalist, detectives, lawyer, private investigators and others. The witnesses they interview are well written and more than window dressing. I really like it that the author doesn't feel the need to spell it out explicitly that some witnesses are lying, hiding things, changing stories, or misleading for their own reasons and allows the investigators to figure things out.