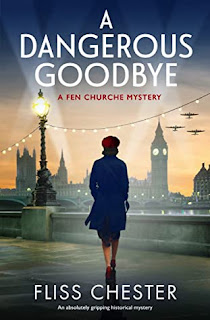 A Dangerous Goodbye is the debut novel in a new post-WW2 series by Fliss Chester. Released 20th Aug 2020 by Bookouture, it's 278 pages and available in paperback, audio, and ebook formats. It's worth noting that the ebook format has a handy interactive table of contents as well as interactive links. I've really become enamored of ebooks with interactive formats lately.

This is a very well written atmospheric historical murder mystery set in the immediate aftermath of WW2 in England and France. Protagonist Fen Church (yes, like the station). The characterizations are clearly delineated - it's a large(ish) cast, and I had no trouble keeping them straight in my head. The setting and narrative arc are well rendered and believable. I did find the pacing a little slow in the first half of the book, but the action soon speeds up. Certainly since it's the first book in the series, a certain amount of latitude must be given to build up backstory and setting (which the author manages quite well).

There are a number of plot threads which wind together into a rather thrilling denouement. One of the side elements is that both Fen and her missing fiance Arthur were keen cruciverbalists (crossword fans) and a number of plot twists turn on that fact; figuring out where Arthur's gone and what's happened are left up to Fen to decipher from coded hints left in his letters. I don't think there will be enough crossword clues for keen solvers, and there might be a bit too much crossword-ish bits for non-crosswords fans, but overall the author strikes a good balance. I hope we get more crossword elements in future books in the series. Time will tell.