The Magic of Terry Pratchett 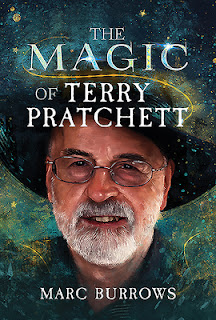 The Magic of Terry Pratchett is a well written and engaging biography of the inimitable and sadly missed master fantasist, written by Marc Burrows. Tentatively due out 30th July 2020 from Pen & Sword on their White Owl imprint, it's 224 pages and will be available in hardcover and ebook formats.

I was unfamiliar with the author's other work (as a comedian, writer, entertainer) (sorry!) and admit to some trepidation going in. I'm a massive fan of Pratchett's work, both the canonical Discworld series, as well as his other series and standalones and was worried that nobody could really do his biography justice. I worried needlessly, as it turned out, because this is a genuinely funny and sensitively written biography. There was quite a lot of information included with which I was previously unfamiliar, especially about Pratchett's early life and writing and career choices.

I liked and appreciated the gently humorous voice of the book, peppered with asides and footnotes of which Sir Terry would likely have approved.  Burrows also points out often in the book those places where strictly factual anecdotes and retellings might be in doubt (Pratchett was renowned for self-mythologizing during his lifetime - and the stories have only grown since his passing).  There are numerous photographs included and it's apparent just how much he was loved and lauded during his too-short lifetime.

I really enjoyed this biography and recommend it unreservedly to fans of Pratchett, Discworld, and his other works. It's written humorously and well in an entertaining (if not rigorously academic) style.

Five stars. Well worth a read.

Disclosure: I received an ARC at no cost from the author/publisher for review purposes.
at July 25, 2020